Is Milk Bad for Cats? The Science Behind Cats and Lactose Tolerance

The notion that cats love milk is a common one which has been embedded in many people’s minds. Almost everyone has seen pictures of a cat contentedly lapping up milk for a dish, or hanging around the barn while cows are being milked. Dogs love bones, bunnies love carrots, cats love milk… right? Still, some people seem to think that milk is not that good for cats. So, is milk bad for cats or not?

But not all stereotypes are true. It’s important to do research before you feed your cat, as your pet’s sensitive stomach can’t tolerate certain foods. Before handing their pet a dish full of milk, pet owners should be asking, “is milk bad for cats?” And as it turns out, the answer to whether or not cats should drink milk may not be the one you’re expecting.

Is It Safe for Cats to Drink Milk?

Not all cats have a lactose intolerance. Nonetheless, many do. Lactose intolerance among cats may trigger vomiting, gassiness, and softening of the stool, or even diarrhea after ingesting milk. If your cat loves milk and experiences no side effects from it, then you may consider milk as a great treat.

Is Low-Fat Milk Bad for Cats?

Low-fat milk has the same quantity of lactose as other types of milk. Cheese and yogurt contain less lactose, so these are better options to give to your kitten compared with milk. Kittens that are newly born have high lactose tolerance; however, that does not make low-fat dairy a beneficial choice for kittens.

Low-fat milk from cows is not nutritionally sufficient for a kitten because it is made up of other nutrient proportions. Instead, a newborn kitten should ingest only the milk from its mother until the weaning stage is over. If you are taking care of an abandoned kitten that is too young to be in the weaning stage, feed your kitten with a milk replacer manufactured particularly for them. Consult your veterinarian about the best milk replacer to use and how to use the dropper in feeding the kitten.

Some cats and kittens are slightly lactose intolerant. This implies that they generate some lactase. These cats can consume a bit of low-fat milk and other dairy products as a form of an occasional treat.

Is Milk Bad For Cats?

What Does Milk Contain?

Lactose is a natural sugar found in milk. When it’s consumed, the lactose is broken down by an enzyme known as lactase. This enzyme ensures that the milk is properly digested and doesn’t result in indigestion. But if your body doesn’t produce lactase, then the lactose in milk can’t be properly broken down. This is why some people can’t handle drinking milk without getting sick and feeling awful.

Because adult cats lack this enzyme, digesting the sugars in milk is virtually impossible. This gives them an upset tummy, which is miserable for both you and them.

Why Can Milk Negatively Affect Cats?

This lactose intolerance affects almost all adult cats. While some cats may seem to have a higher tolerance level than others, it’s still probable that they’ll get sick once given any significant amount of milk. Even if you’ve noticed that your cat can handle tiny amounts without consequences, don’t assume that they can tolerate milk. The small amount may have allowed them to get away with it last time, but giving them a larger serving is a bad idea.

Even if your cat is among the few who can tolerate milk, you’ll only be able to discover this fact through trial and error. Since you’ll risk making him ill, you should definitely avoid testing your cat’s limits.

What Are the Consequences of Your Cat Drinking Milk?

Cats who do drink milk can suffer from many different consequences. One of the most severe consequences is diarrhea, as it can quickly dehydrate their body. It’s super important to avoid dehydration in cats, as it can be fatal for weaker felines.

Other symptoms of lactose intolerance can include a gassy or bloated stomach. Your cat may vomit, and may also experience abdominal discomfort or pain. In addition to making your pet feel horrible, this can also result in a lot of cleanup and hassle for you.

So despite what you may have previously assumed before you asked “is milk bad for cats?”, cats should stay away from milk. They don’t have any nutritional needs which are met by drinking milk, and it’s likely that it will only harm them.

Is Milk Safe for Kittens?

Kittens can be given milk drinks only when they are still nursing. However, milk from mother cat is extremely different from those you can buy from the grocery stores. The stomach of a kitten is highly sensitive and cannot process most milk. If your kitten is separated from its mother, choose a replacement formula mainly designed for them. Is milk safe for kittens? Yes, it is. But the milk should only be that which come from the mother.

Even kittens, who don’t have the same lactose intolerance that their adult counterparts do, shouldn’t drink cow’s milk. A kitten will do just fine with commercially available kitten food. If they’re younger than eight weeks old and mama cat isn’t around, you can get mother’s milk replacement at most pet stores. This will help with their nutritional requirements until they’re old enough to wean.

If you are wondering, “Is almond milk bad for cats?” The truth is, even if the almond milk does not contain lactose, it has other ingredients such as almond nuts, which some cats are highly sensitive to. On the other hand, goat milk is ideal for the health and well-being of cats and dogs that have digestive problems. Cow milk is rich in lactose. When lactose intolerant cats drink cow milk, they might end up having an upset stomach such as diarrhea and stomach cramps.

What Should I Feed My Cat Instead?

Now you know that milk isn’t a good choice for your cat. But you may be wondering what you should give them instead, especially if they don’t seem to drink very much.

Most cats should just stick to drinking water. They don’t need extra nutrition, since good varieties of cat food will provide them with a healthy diet, so plain water is perfect.

If your cat doesn’t seem to be staying hydrated, there are several things you can do to help. Make sure his bowl has been rinsed out after cleaning to eliminate any soapy smell and check to ensure that the water is fresh. It could be that your cat doesn’t care for seemingly stagnant water, which means that a fun fountain can solve the issue. Trying mineral water instead of tap water can also work, as can slipping an ice cube into the water on hot summer days.

What Should Cats Drink & How Many Liquids Do They Need?

Remember too that most cats don’t drink all that much. If you feed them wet food, much of their water intake comes from the moisture content of their food. Even if they’re only eating dry food cats only need to drink a few ounces per day.

If you really want your cat to be able to lap up a dish of milk on occasion, try lactose-free milk. This milk has had an enzyme added which breaks down the lactose, making it safe for your kitty to enjoy.

What about other types of milk? Is milk bad for cats if it’s made from soy? Yes, because soy milk is typically sweetened with cane syrup and other fructose-filled sweeteners. Cats can’t properly digest these, so it’s wise to avoid them.

Other dairy products such as cheese or yogurt may be acceptable as an occasional treat for your kitty, as the lactose in these generally don’t present the same problem that milk does. Check with your vet first, though, and remember to keep any portions of these treats tiny.

Even if you know your cat is able to handle some lactose, milk still isn’t a necessary diet supplement. If you’re worried about their hydration level or calcium intake, switching to a high-quality wet food may do the trick. Use cat treats to spoil your feline friend, and rest assured that he isn’t missing out on anything just because you’re not giving him milk.

So now that you know the answer to the question, “is milk bad for cats?”, you can better care for your beloved kitty. You can also pass this knowledge along to other friends and fellow cat owners, as the misconception that cats love milk is one which many people believe. 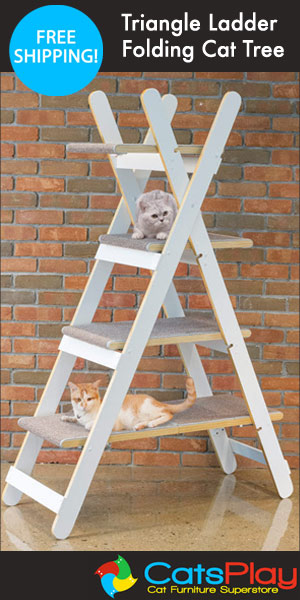